These are exclusive, copyrighted Video Documentaries & Interviews of 6th Bomb Group vets relating their experiences during WWII. Our legacy website is intended to grow with relevant content over time. Please CONTACT US if you wish to contribute materials or if you’re interested in volunteering.

70 years later, B-29 air crewmen from the 6th Bomb Group, Tinian Island 1945, share history through funny stories of the war. Edited by the son of pilot Ed Vincent, Kent Vincent.

Fighting For Our Lives, Our Freedom, Our Future | The B-29 Pacific War Bombing Missions ©6th Bomb Group Association, 2020

In this exceptional exposé, 6th Bomb Group B29 Aircraft Commander Ed Vincent describes the frightening experience of the 15 hour non-stop B29 bombing missions over Japan from briefing to return. The narration is given with impressive 6th BG archive photos and included the perils of overweight take-offs, celestial navigation over 1500 miles of open ocean, extreme turbulence, conventional, incendiary and mining missions, flak and zero attacks, casualties, bombing impact and justification.

Narration: Filmed in 2020 at the home of Ed Vincent
Video Presentation and Introduction: Kent Vincent May 2020
Duration: 33:00 min 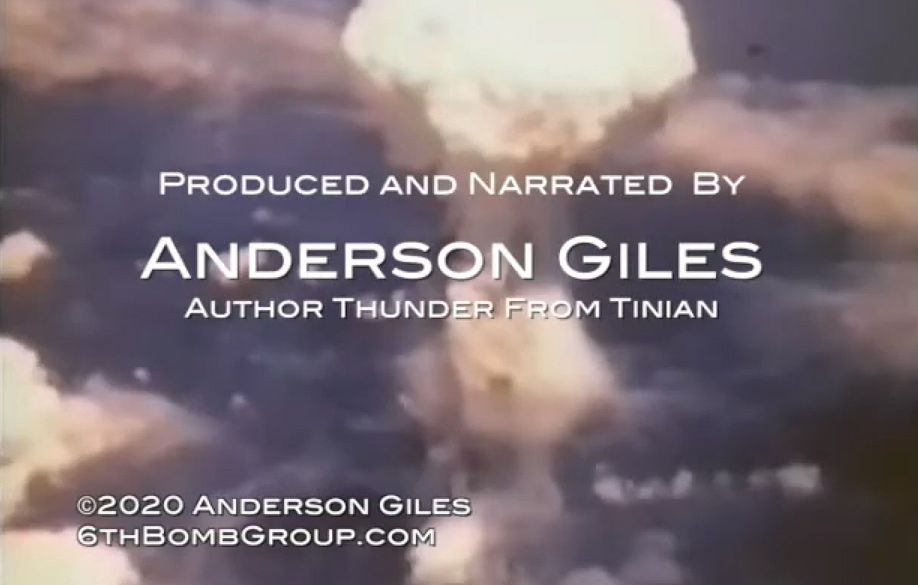 RARE FOOTAGE | Pacific War historian and author Anderson Giles provides intriguing commentary to the historic 509th Composite Group silent color documentary film of the atomic bomb missions over Japan from Tinian in 1945. Included is rare footage of the Little Boy and Fat Man atomic bombs secret facilities, preparation, loading, bombing missions and detonation over Hiroshima and Nagasaki. The top secret Enola Gay B-29 that dropped the atomic bomb on Hiroshima was disguised and positioned on Tinian, Island in the Marianas as part of the 6th Bomb Group.

“No weapons program in United States history demanded more heroism from the men who served it than the B-29 Superfortress.” – The History Channel

PACIFIC WAR | Some of the best 6th BG pictures of the Pacific War from Tinian Island in the Marianas were taken by 6th Bomb Group photographer, Bill Webster. This video highlights many of his large format photos as he describes how they were taken, the making of the Pirates Log, and how he managed to bring many hundreds of negatives home.