about the 6th Bomb Group Association

If not for these brave men and their sacrifices, we would not enjoy the rich blessings and freedoms we enjoy today.

This website is dedicated to the men of the 6th Bomb Group, and to those who supported them in the field and at home. 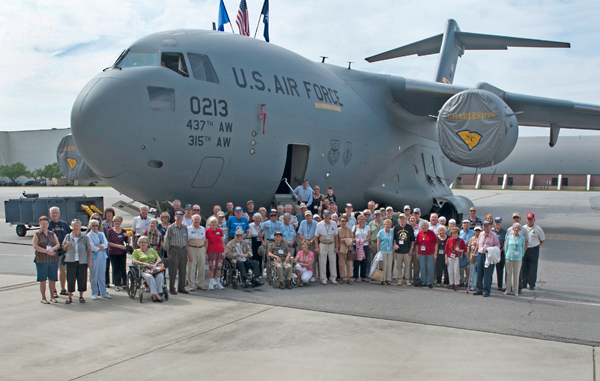 The Group was based on the island of Tinian during WWII and participated in the war effort against Japan during 1944-45. The Group, was part of the 313th Bomb Wing, 20th Air Force. Along with other groups based on Tinian, Saipan and Guam, they were responsible for the bombing campaign that finally brought an end to the war. Although many lives were lost – on both sides – these efforts saved the millions of lives that would have been lost in an invasion of the mainland.

The 6th Bomb Group Association was formed by Officers and enlisted men of the Army Air Corp 6th Bomb Group to annually reunite its veterans who served during WW2 in the Pacific War of 1944-1945. It soon evolved to include their multi-generational families yearning to learn and preserve its history and veteran war experiences. While the number of veterans has diminished, the Association has remained vibrant and committed to accurately preserving the rich history and lessons of the war and making that history through our archive readily available to future generations. Our target is students, teachers, historians and the curious. The 6th Bomb Group Education Association is a registered 501(c)3 non-profit organization.

WHAT WE DO
• Provide an easily accessible, searchable and navigable on-line education link to our Pacific War archive
• Create teachable, subject-specific videos and articles compiled from our archive
• Organize Annual Reunions at locations of military interest for continuing education and vet honor
• Create an informative Newsletter for all members twice per year
• Provide a Scholarship Fund for the education of descendants of the 6th Bomb Group

PREFER TO DONATE BY CHECK?

We’d love that. An IRS-compliant Donation receipt will be return mailed. Here’s our Mailing Address:

The Association has grown from its initial cadre of 40 members to a current active mailing list of over 300 veterans, family and associate members. To keep the memory of the 6th alive the Association has created several Memorials around the country including ones at the following locations: