The UK had originally tried daylight precision bombing, but suffered huge casualties to enemy aircraft and antiaircraft fire. As a result, they were forced to switch to a tactic of night area bombing. At the same time, the UK (and Germany) began to view such missions as serving a legitimate military objective of shortening the war by demoralizing and “dehousing” the civilian population.

In contrast, the US decided to pursue the strategy of using daylight missions to hit military targets and made every effort to minimize civilian casualties. One reason the US felt that they could succeed was because of the difference in aircraft. The UK used bombers that had weak defensive armament, but could carry large bomb loads. The US used the B-17 “the Flying Fortress,” which was only a medium bomber, but had a lot of defensive armament. Nevertheless, the US still suffered significant casualties. Over time, a number of changes were made which improved the survival rate: better formations were adopted, missions were flown from higher altitudes (using the Norden bombsight), and long-range fighter escorts became available. However these changes were not pleasant. The B-17 was not originally designed for high-altitude operations. The waist gunners stood in open windows and the whole crew had to wear oxygen masks and bundle up for the winter missions where they were operating in Arctic conditions.

The B-29 was specifically designed to avoid these shortcomings. The entire aircraft was pressurized and enclosed. At the same time, the aircraft carried a bomb load that was equivalent to that of the heavy bombers. In addition, the planners knew that the aircraft would be used in the Pacific and demanded a long range aircraft. By and large, the B-29 met these objectives.

However, even while the B-29 was being designed and built, the US was considering changing the strategy to that of area bombing. The military was designing new and improved incendiary bombs specifically for the purpose of burning down Japanese housing. And the military intended to use the B-29 for that purpose. There were a couple of reasons why this approach made particular sense in Japan. First, the Japanese cities were made of wood and were particularly vulnerable to fire. Second, in contrast with Europe, many of the war production facilities in Japan were dispersed among the civilian population. Of course, the B-29 crews were not consulted about this change in approach. On a philosophical level, most would have undoubtedly preferred precision bombing to area bombing.

On a gut level, their concerns were more pragmatic: to survive the missions and to end the war. And, if a particular type of mission would end the war faster, then so much the better. 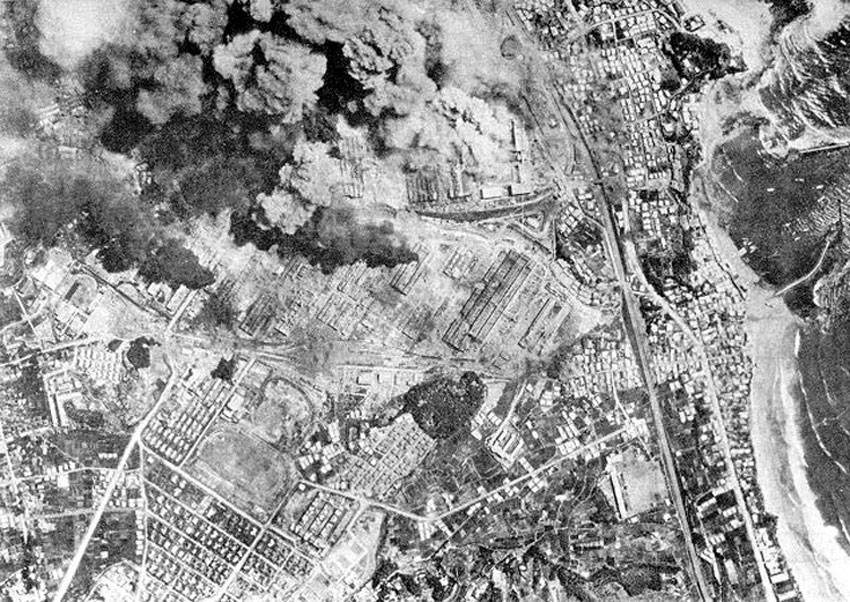 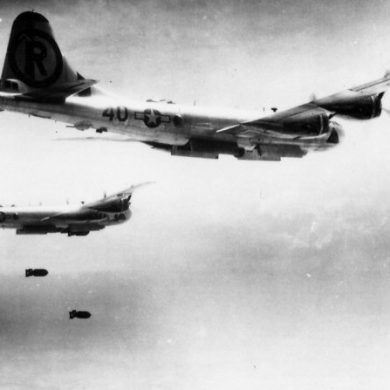 The jet stream did pose a problem on some missions. But the jet stream does not stay in one place. It was probably over Tokyo for only a few memorable days, and then moved elsewhere. Over time, the bombing altitude was reduced. The bombing results from high altitude were not as good as had been expected, and the air defenses were not as bad. 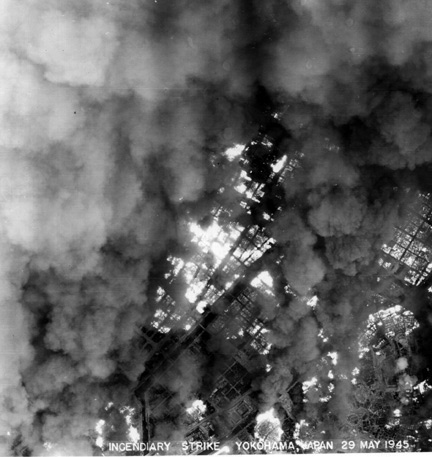 capacity and to “de-house” the population. In contrast with Germany, much manufacturing was conducted in small workshops and homes scattered throughout the cities.

Nevertheless, the area bombing missions were both productive and very risky. They were conducted at low altitude, at night. You still had hundreds of planes from different wings flying over the same small place in the dark. The first planes had to contend with finding the target. The other planes had to contend with violent updrafts and alert anti-aircraft gunners and searchlights. Although these were “area” bombing missions, the crews were under specific instructions not to bomb certain areas, such as the Emperor’s palace. It is a tribute to their skill and bravery that they managed to avoid those areas.

The 6th Bomb Group received a Distinguished Unit Citation for its involvement in these missions.

To General LeMay, the aerial mining operations were a diversion. They were performed at the request of the Navy. LeMay gave the 313th Bomb Wing the primary responsibility for these missions. They proved to be among the most effective missions during the war – and among the most dangerous. The 6th Bomb Group participated in 12 aerial mining missions and received a Distinguished Unit Citation for the July missions.

OPERATION STARVATION | The aerial mining operations were part of “Operation Starvation.” This was a five phase operation that began on March 27 and ended in July. The 6th Bomb group participated in Phase 1, Phase 2 and Phase 5. Phase 1 (Mar 27 – Apr 30) targeted the Shimonoseki Straits, a critical and heavily-defended, part of the shipping lanes. Phase 2 (May 3 and 5) targeted the shipping lanes to the industrial centers. Phase 4 (May 13) extended the minefields from Shimoneseki to northwest Honshu and Kyushu. Phase 5 (Jul 9 – Aug 14) extended the blockade to include several Korean ports.

The B-29s proved to be the perfect plane for the mission, able to haul heavy loads for long distances. In order to drop the ordinance correctly, the B-29s had to flew these missions at low-altitude – from 5,000 to 8,000 feet. To minimize casualties, the B29s flew at night and established the route using radar and other means. Each aircraft carried a mix of 1,000 lb and 2,000 lb acoustic, magnetic and pressure mines. The B29s dropped each mine separately and each had a parachute.

Then on 9 July the Group returned to mining Japanese waters. This time the objective was an interruption of shipping between the Asiatic mainland and Japanese home ports. To accomplish this, ports had to be mined on the coast of Korea and on northern Honshu. These missions brought the Group its second Distinguished Unit Citation.

Other missions flown in this period were to the Korean ports of Rashin, Seishin, Gensan and Fusan and to the Japanese ports of Fushiki, Nanao and Niigata. The last mining mission was flown on the night of 21-22 July.

Partial list of the names and locations of the minefields:

MOTHER HENS | In some cases, the B-29 would act as “mother hen” to fighters attempting to navigate the long over water flight to the target area. This was particularly helpful to land-based pilots who were not used to navigating long distances over water. This did not always work out well. In one case (not involving the 6th), several fighters were lost when the “flock” scattered after penetrating a thunderstorm. Four aircraft of the 6th Bomb Group flew a Fighter Escort mission to Iwo Jima on February 2.

B-29s occasionally flew tactical support missions to support Army or Navy operations. General LeMay thought these missions were contrary to the prime mission of the B-29 – which was strategic bombing. Nevertheless, the Navy felt that the missions were necessary to stop the Kamikaze attacks that were crippling the fleet. The 6th Bomb Group flew several tactical missions in April, mostly against airfields on Kyushu.

The next day, April 8, ten other planes of the Group attacked Kanoya East Airfield on the southern tip of Kyushu. This was the first of a series of missions for the purpose of neutralizing airfields from which the enemy was staging aerial attacks against naval units supporting ground forces on Okinawa. These airfields were the homes of the Kimikaze flyers.

During April, eight such tactical missions were flown with an average attacking force of twelve B-29’s. Kanoya East Airfield was hit four times – on the 8, 17, 21 and 22 of April. Miyakonojo Airfield was attacked twice – on the 27th and 28th. Matsuyama Airfield was bombed once – on the 26th. Bombing results were excellent with bomb patterns placed on building areas and runways. Effectiveness was further demonstrated by the diminished intensity of enemy air attacks on Okinawa.

In this kind of mission, the aircraft took position at a certain location on the mission route and, if an aircraft went down, attempted to locate the crewmen and to drop life rafts. A Navy ship (including a submarine) or a Navy plane (such as a PBY) would perform the rescue. Three aircraft of the 6th Bomb Group flew a Super-Dumbo mission on April 1.

PHOTO ABOVE: POW B-29 Supply Mission, Guam. The plane is being loaded with staples like whisky. Photo provided by Les Morgan Jr. All Rights Reserved 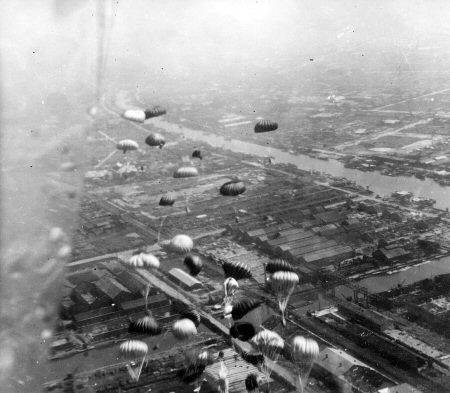 The B-29 “Reamatroid” on a POW supply mission. PHOTO: provided by Les Morgan, Jr. All Rights Reserved.

The 3rd and 41st Photo Recon Squadrons flew specially modified B-29s (F-13As) on photo reconnaissance missions. These squadrons were based at various times on Saipan and Guam.

Some B-29s groups dropped leaflets to Japanese civilians warning of pending attacks on Japanese cities. This is one of the most famous examples and lists the names of Japanese cities that might be bombed. On the night of 27-28 July 1945, the 73rd Bomb Wing dropped 700,000 of these leaflets on several Japanese cities. Post-war intelligence indicates that the leaflets were very effective and that civilians rushed out of the cities, leaving no time for the military to prepare special defenses. The message read:

Read this carefully as it may save your life or the life of a relative or a friend. In the next few days, four or more of the cities named on the reverse side of this leaflet will be destroyed by American bombs. These cities contain military installations and workshops or factories, which produce military goods. We are determined to destroy all of the tools of the military clique that they are using to prolong this useless war. Unfortunately, bombs have no eyes . So, in accordance with America’s well-known humanitarian policies, the American Air Force, which does not wish to injure innocent people, now gives you warning to evacuate the cities named and save your lives.

You can restore peace by demanding new and better leaders who will end the War.

We cannot promise that only these cities will be among those attacked, but at least four will be, so heed this warning and evacuate these cities immediately.”