The Day the Enola Gay Arrived on Tinian North Field

The Enola Gay was a Boeing B-29 Superfortress bomber, named after Enola Gay Tibbets, the mother of the pilot, Colonel Paul Tibbets. On 6 August 1945, piloted by Tibbets and Robert A. Lewis during the final stages of World War II, it became the first aircraft to drop an atomic bomb in warfare.

The Day the Enola Gay Arrived on Tinian North Field

We had just returned from a night bombing mission over Japan and had disembarked from our war weary B-29.  It was another long mission under our belt, and we were waiting for the army truck to pick us up and take us back to the squadron for debriefing and some much-needed sack time. As we stood around waiting for our ride back to the squadron, I noticed a new arrival to our area sitting a couple of hardstands (airplane parking area) away.

However, this B-29 was not like any of the other B-29’s sitting on their hardstands in our squadron area. It was bright and shiny, had different propellers (something a flight engineer would notice) and didn’t have any gun turrets. It also didn’t have our group insignia painted on the tail.

Instead, it had a large black arrow facing forward in a circle painted on the vertical fin. I thought that it must a photo recon aircraft, stripped down for more speed and longer-range flight. It was such a beautiful airplane that I decided that I needed to take a picture of it and send it home along with some other photos taken on Tinian. So that is exactly what I did not realizing, until fifty-two years later, when going through some old war photos in my Bomb Group Album that I had taken a picture of the Enola Gay the day that it arrived on Tinian. That was the last time I saw that airplane with the arrow on the tail in our squadron area.

There were Japanese spies hiding out in the coral caves on both Tinian and Saipan who would radio information to Japan about any B-29 arrivals or departures from the Airfields. The Air Corp used some trickery to confuse the spies by changing the insignia on the vertical fin of all airplanes of the 509th Bomb Group so that they would blend in with the other squadrons on Tinian North Field.

Milton Sprouse, a crew member from the 509th Bomb Group said in an interview at their 1994 reunion that the first night that they were on Tinian the black arrow was removed from the vertical fin of all fifteen airplanes of the 509th Bomb Group, and they were repainted with a new insignia so that they looked like all the other airplanes in the squadron. The arrow on the vertical fin of the Enola Gay was replaced with the 6th Bomb Group Insignia that consisted of a black R inside a black circle. By daylight the next morning it looked like all the other 6th Bomb Group airplanes sitting on their hardstands. For the Japanese spies hiding in the caves on Tinian, their radio message to Japan was that those airplanes with the black arrow “had mysteriously disappeared.”

In an interview with Jim Miller, a fuels specialist with the 6th Bomb Group, he recalled a similar incident with this strange aircraft. One day there was a big new B-29 with an arrow on its tail, and the next day it had a circle R. Mr. Miller knew all the 6th aircraft and most of the crews but when he was told to deliver fuel to this area, he had to be escorted in and out by armed guards. This was the only time in all his fuel deliveries to 6th bombers that this happened.

NOTE:
William “Bill” Brake died on April 28, 2016 in Acton, Texas. Bill served on Tinian as a flight engineer on a Reamatroid, crew 3922, in the 39th squadron, of the 6th Bomb Group, and flew 23 combat missions over Japan. He continued to work in the airline industry retiring from American Airlines in 1991.

Jim Miller was with the 6th BG as an aircraft fuels’ specialist in the 39th Squadron. He was considered in a mission critical position and because of that designation was excused from KP and guard duties. He thought that was a pretty good deal. Jim delivered fuels to the flight line in a truck holding 2000 gallons of fuel, hooked up a 2.5-inch nozzle and pumped away. It took several trucks and about 30 minutes to completely fill a B-29, and Jim did this all day, every day. The original photo taken by Bill Brake has been lost over time. The one depicted with the arrow tail marking in this article is similar photo to what appeared in our 6th Bomb Group January 2013 newsletter edition. The interview with Jim Miller took place at the Boise, Idaho reunion in 2018 by Fran and Shirley Bates, newsletter editors, and appeared in a subsequent newsletter. 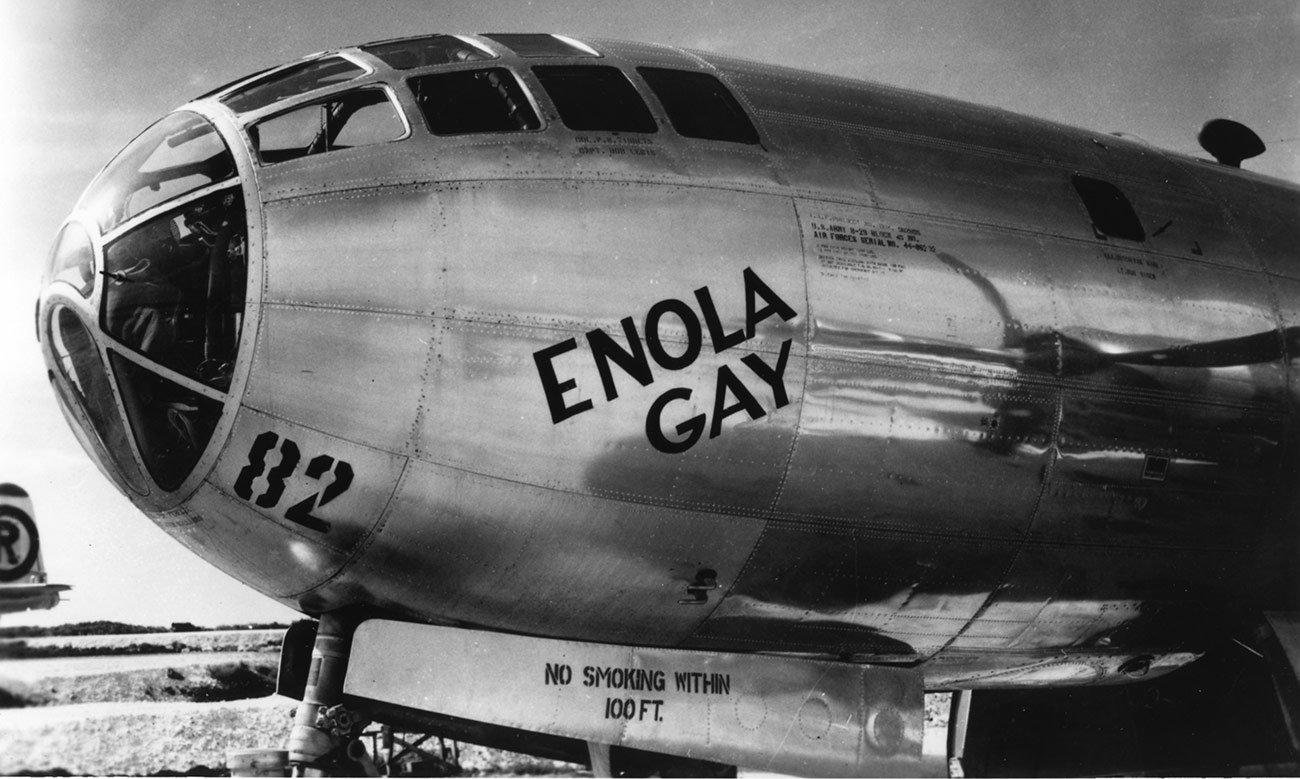 Enola Gay on Tinian with the 6th Bomb Groub. ©Photo by Bill Webster