PLANES: Building a B-29 Bomber

HomePLANES: Building a B-29 Bomber

Building a B-29 Bomber

In 1942, the B-29 looked futuristic. On paper, the B-29 was a technological marvel. Considered the most advanced bombers in the world, the B-29s had pressurized cabins, remote control gun placements and 2,200-horsepower engines — the most powerful piston engines of the time. Able to fly over 3,000 miles, up to 16 hours, these bombers were just what the Allies needed to target Japan.

The initial engine was the Wright R-3350-23 Cyclone. This engine had 9 cylinders in 2 rows, for a total of 18 cylinders. The engine was air-cooled and had an unfortunate tendency to catch fire (at every engine start, a ground crewman stood by with a fire extinguisher. His role was more than symbolic.) The engine had 2 turbo-superchargers for high altitude performance. The takeoff power was 2,200 hp. The war-emergency power was 2,300 hp at 25,000 ft. Wright attempted to cure the overheating problems with the R-3350-41. This engine had baffles and oil crossover pipes. The last B-29s had the R-3350-57 engine. Dodge also made Wright Engines. However, air crews seemed to have a lot of fuel problems with the Dodge engines.

AIRPLANE CONSTRUCTION | Airplanes were now the number one priority for the War Production Board, with bombs, bullets, and rockets second in demand. Airplanes were being constructed all across America but there were four main construction sites manufacturing B-29’s.

Boeing built a total of 2,766 B-29s at plants in Wichita, Kan., (previously the Stearman Aircraft Co., merged with Boeing in 1934) and in Renton, Wash. The Bell Aircraft Co. built 668 of the giant bombers in Georgia, and the Glenn L. Martin Co. built 536 in Nebraska. Production ended in 1946. B-29s were primarily used in the Pacific theater during World War II. As many as 1,000 Superfortresses at a time bombed Tokyo, destroying large parts of the city. Finally, on Aug. 6, 1945, the B-29 Enola Gay dropped the world’s first atomic bomb on Hiroshima, Japan. Three days later a second B-29, Bockscar, dropped another atomic bomb on Nagasaki. Shortly thereafter, Japan surrendered. The Army designed the B-29 to fulfill the American philosophy, developed in Europe, of using high altitude daylight precision bombing. However, the jet stream over Japan limited the effectiveness of this tactic. Consequently, the B-29 was used in missions for which she was not intended, including low altitude night area bombing and low altitude mining operations. That she eventually succeeded at all of these things is a testament to the aircraft and to the tenacity of the men and women who designed, built, fixed and flew her.

B-29 VARIATIONS
Over the course of the war, the 6th Bomb Group received almost 120 aircraft. Most of these aircraft were standard B-29s. This includes 32 B-29As and 2 B-29Bs. The B-29A was slightly different than the B-29. Due to a change in construction methods, it had a 1 foot larger wingspan and the number of machine guns in the forward dorsal turrets was doubled to 4. 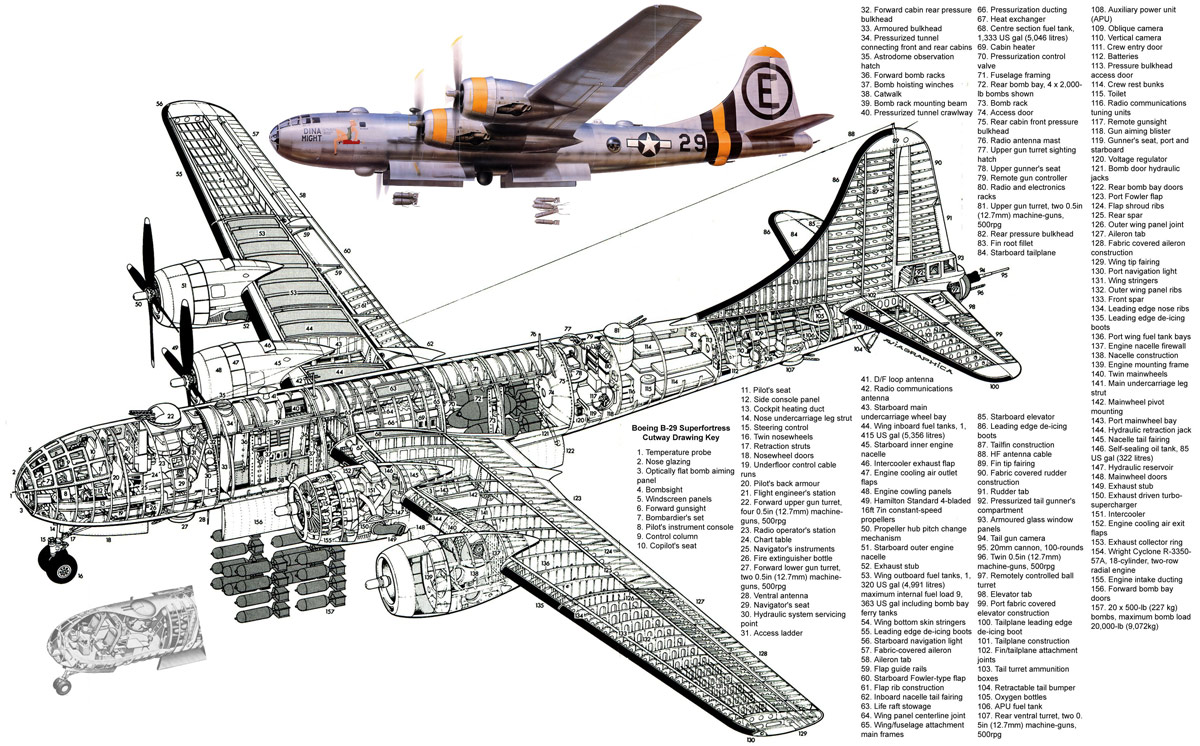 On long-range missions, the planes carried auxiliary fuel tanks in the rear bomb-bay (these are sometimes incorrectly described as “Tokyo Tanks”) however, that name was already in use to describe long range tanks used on the B-17, which never went to Tokyo.)

The following should give you a rough idea of the extent to which the Groups were pushing the envelope. Normally, you compute the fuel needed to complete a mission with a safe reserve and then add enough bombs to safely stay within gross weight. The aircraft will have a partial fuel load and a partial bomb load. In the case of the B-29, the Groups kept adding more fuel and more bombs until they essentially reached the maximum capacities of the aircraft. There was nothing more to add. And, yet, the planes still flew!