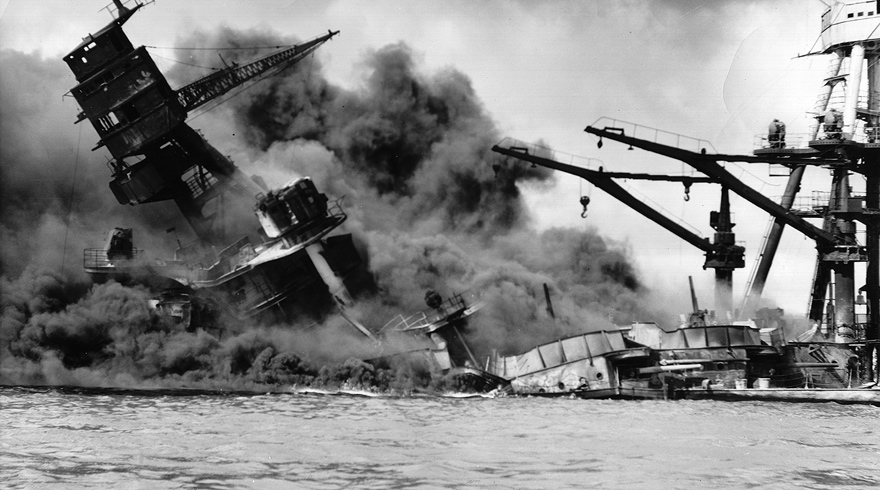 Why the United States entered WWII

The demand for oil was a major factor in bringing the United States into WW2. Japan is an island nation that doesn‘t have a lot of natural resources. After World War I, Japan had control of Tinian, Saipan, and other islands of the Northern Marianas, “white” European countries had extensive holdings in resource rich areas, and control of Guam and the Philippines belonged to the United States.

JAPAN’S PROBLEM: The global depression hit Japan earlier and harder than many other countries.
JAPAN’S SOLUTION: In the 1930’s, Japan invaded many Asian countries and gained access to many of the natural resources they lacked with the exception of oil which they purchased from the United States.

JAPAN’S PROBLEM: The United States and other countries were alarmed with Japan’s expansion throughout the Pacific area. The League of Nations issued a censure to Japan for their expansionist policies in Manchuria.
JAPAN’S SOLUTION: Japan withdrew from the League of Nations in February 1933, and thus began the formation of the “Greater East Asia Co-Prosperity Sphere” – which actually turned out to be Japan ruling Asia or “Asians ruling Asians.” Non-Asian nations had no right to the natural resources of the area.

JAPAN’S PROBLEM: Japan needed oil. Japan decided that they must go to war with the United States and other Allied countries.
JAPAN’S SOLUTION: Colonies of the Southwest Pacific region controlled by non-Asian Nations were rich in natural resources and oil. Those areas had to be taken. Japan knew that the European countries were too busy fighting Germany to put up a strong fight.
JAPAN’S PROBLEM: Once those areas were conquered, getting the oil to Japan became the problem; it had to travel thru the South China Sea past the Philippines.
JAPAN’S ANSWER: The Philippines (AMERICAN POSSESSIONS SINCE 1898, SPANISH AMERICAN WAR, TREATY OF PARIS) had to be taken and held. Once the Philippines are invaded, Japanese leaders knew that the United States would respond by sending the Pacific fleet. 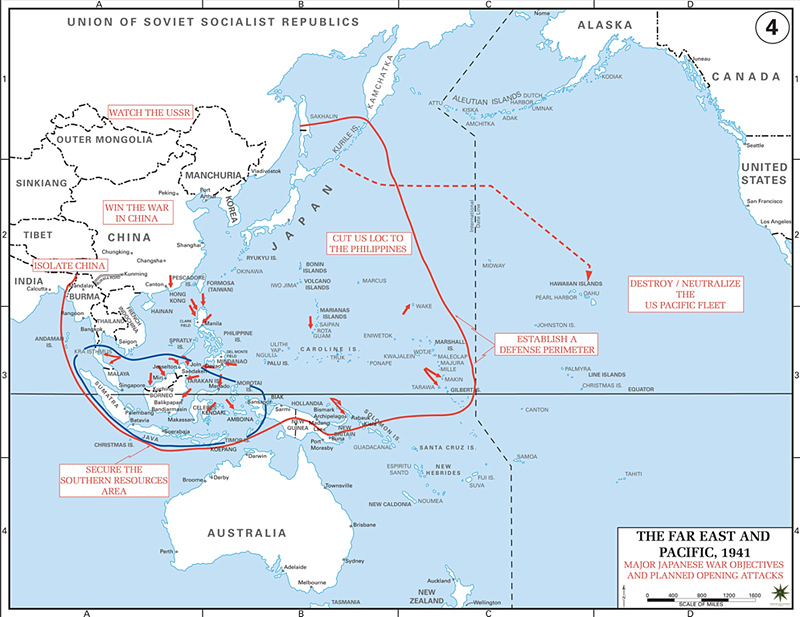 JAPAN’S PROBLEM: Guam and Wake Island (US possessions since 1898 and 1899 respectively) were within the areas of the Pacific controlled by the Japanese, they could be used for a stepping stone response.
JAPAN’S ANSWER: The islands of Guam and Wake Island had to be removed as springboards for a counter-attack. The defensive perimeter had to be extended.
JAPAN’S PROBLEM: Japan knew the Pacific fleet would sail from Pearl Harbor to defend and retake the Philippines.
JAPAN’S ANSWER: Admiral Isoroku Yamamoto decided that a surprise attack on the fleet at Pearl Harbor gave a greater chance of destroying it.

Phase One of the Japanese plan called for:

1) Destruction of the Pacific fleet at Pearl Harbor.
2) Conquest of Guam, Wake Island and other Pacific Islands creating a defensive perimeter.
3) Securing the oil rich areas of Southeast Asia.
4) Invading and controlling the Philippines, opening up the South China Sea for transportation of oil and other goods to Japan.

Success in Phase One meant the Japanese could run wild in the Pacific before the Americans could rebuild their forces sufficient for a counter attack. Destroying the Pacific fleet and establishing a defensive perimeter would guarantee that it would be a long, hard and tough war for the US. Japan believed that the US was lacking the resolve for a long, hard and tough war. Although the Japanese were aware of the industrial might of the United States, they believed that the US would sue for peace rather than get into an extended war. Phase One of the plan was a tremendous success.

On the first day, December 7, 1941 (December 8 on the other side of the International dateline) Asian targets were attacked, the surprise attack on Pearl Harbor was a great success; much of the Pacific fleet was in ruins. On the same day, Japan also attacked Guam and Wake Island, both the Battle of Guam and the Battle of Wake Island were won, extending the defensive perimeter Japan needed. The invasion and attack of the Philippines resulting in the Battle of the Philippines began later that same day. The oil rich areas of the Dutch East Indies were attacked and secured by March 1942. On April 9, 1942, American and other allied units surrendered on Bataan. The final surrender came on May 5, 1942 when General Jonathon Wainwright ordered his communications officer, Lt. Commander Fort Hammond Callahan to send the last message from Corregidor indicating surrender of all allied forces in the Philippines. By May of 1942, all of the objectives of Phase One were met.

“A DAY OF INFAMY” is a phrase that resonates in America even today.

On Dec 8, 1941, FDR presented the case for war in his address to Congress and the American people saying “a state of war has existed with Japan.”  The United States declared war on Japan. In return, Germany and Italy as part of the Axis, declared war on the United States with the US returning a declaration of war on Germany and Italy. Had Japan misjudged the resolve of America? Churchill and FDR met in Washington in the Arcadia Conference in Dec ’41- Jan ’42, and agreed that the defeat of Nazi Germany was first and foremost and that the United States would have to “hold on” in the Pacific until the Nazi’s could be defeated. The United States was in a two-front war in Europe and the Pacific. It was now truly a World War.