THE LOG AND THE UNLUCKY CREW OF THE “SNOOKY.”

“Snooky” was a B-29 (serial Number 42-65347) assigned to the 24th Squadron of the 6th Bomb Group during WWII. “Snooky” was the first 6th Bomb Group B-29 to arrive on Tinian and it survived the war and returned to the USA. Captain Clark A. Preston was the aircraft commander of “Snooky” and brought her from the USA to Tinian Island in January 1945. Captain Preston did not survive the war.

A letter to Snooky from her father, Captain Clark A. Preston:

“On December 16,1944 we got our fly-away B-29, and it is a wonderful piece of machinery. All the fellows are taking such an interest in it, and before long it will be the greatest part of each of us. We all trust that it will take us to our target and bring us back safely no matter how many times we must go. She can go like the wind and we are all tickled with our Christmas present from Uncle Sam. We christened our ship “Snooky” after you, who all of the crew got acquainted with when we were in Grand Island. I am quite anxious to get started in this new business, but not quite so anxious as I will be to get home. “Snooky,” we are all depending on your namesake to do the job and bring us safely home. It is a wonderful airplane and I have every confidence in her.”

We left Mather Field in Sacramento, California at 0525, January 14, 1945 for John Rogers Field, Hawaii. The weather had been bad for several days because of low ceilings and fog, and this morning you could see the reflection of ground lights against the base of the low clouds. I gathered the crew together, and we headed for the line.

The weather office advised us that the ceiling and visibility was ok for an instrument take-off. We made a thorough check of the airplane, made certain all of our equipment was aboard, started the engines, and taxied out for the take off. The fog was rolling in on the edge of the field as we started down the runway. We accelerated rapidly and when the airspeed reached 120 MPH, I pulled back on the control column and we smoothly left the runway. As I motioned to Goodwin, the co-pilot, for ‘gear up’ the fog covered the nose of the airplane with a milky whiteness; I made no further effort to see outside but relied on the instruments alone. The overcast was not thick, and we broke through at 3,000 feet, close to San Francisco. I navigated by radio compass to the Farralon Islands, and then gave Rinne, the navigator, a position report and let him take over.

The sky was clear and the stars were bright on top of the overcast, but Rinne only had time for one celestial fix because of the approaching dawn. Three naval vessels, stationed at 500-mile intervals along our route, broadcast a homing signal which could be picked up by the radio compass. With these facilities it would have been entirely possible for us to have navigated to Hawaii without a navigator. However, good navigators seldom ever resort to this easy method of navigation, and it was an injury to Rinne’s professional pride when he tuned in on one of these ships to check our position.

The trip was uneventful and tiresome. We sighted Oahu and skirted Koko Point, came in over Waikiki Beach and landed at John Rogers Field 10 hours and 50 minutes after take-off.

We remained over in Hawaii one day in order that the ground crews could make a 25 hour inspection on the airplane. On the 16th at 0900 we departed for Kwajelein. This leg was shorter than the last but a long one when you think of flying over 2100 miles without seeing land. Johnston Island was 40 miles north of us about the mid-point along our route.

Kwajelein, like most of the coral islands in the Marshalls was no paradise. The landing strip occupied most of the island and the highest spot is not more than nine feet above the sea. All signs of vegetation or natural growth had been swept away by the invading forces, and the overall picture was one of desolation and destruction. The wreckage and debris of war lay in huge piles at the far end of the island. In their place were airplanes, trucks and machinery operating with great speed and in many numbers. The few natives that once lived on the island were moved to smaller reefs on the fringes of the Atoll.

We were provided quarters and a canvas cot and for fifty cents we were issued a sheet that looked like it had been slept on since the beginning of the war and never been washed. After we had eaten our supper we all went for a swim in the lagoon behind the barracks. The wind was brisk and the surf rough and choppy, but the water was pleasantly warm and restful. Later in the evening I sat half-way through a picture that I had seen back in the States. It was here that I got my first impression of how much these soldiers missed their wives and sweethearts. Each time the hero kissed the heroine they whistled and yelled, and in this particular picture there was enough romance to keep their emotions in high gear for a long time to come. It almost seemed inhumane.

Since we were the last B-29 to land at Kwajelein that day, we were first in take-off position for the next day. This gave us a chance to be the first airplane out of the 6th Group to land at Tinian. In order that we might insure this distinction, we cruised with extra power, arriving a full half hour ahead of the next airplane.

We encountered numerous thunderstorms and squalls along the last 50 miles of the route so werew quite low and close in before we could see Tinian for the first time. After seeing Kwajelein I think we were all worried about what kind of an island would be our home. It was a tremendous relief and extremely pleasant sight to see the abundance of green growth that covered the island from end to end. We could see North Field when we received landing instructions to land on number one strip. After the wheels touched the ground the airplane decelerated rapidly as the runway was slightly uphill and into a brisk prevailing wind.

We taxied three or possibly four miles before we reached our parking area. The runways and taxi strips were still under construction and we were not able to follow the most direct route. After we parked and shut off the engines we could see familiar faces gathering around the airplane. Everyone was smiling and it was indeed a warm feeling to have such a cordial welcome. The photographic department was there taking pictures at the various stages of unloading. The official welcome committee of one, Major Tatum, shook hands with Colonel Pratt and welcomed him as the first pilot from the 6th to land at Tinian. Colonel Pratt was carried as a passenger and during these ceremonies the crew stood in the background. I was quite proud of the performance of the entire crew on this flight—Rinne and Hett doing the navigation; Birsner with the radar and Parker on the radio, not to mention the others who performed certain tasks, perhaps not quite so vital. In view of all this, it seemed a bit ironical to give the credit to the passenger 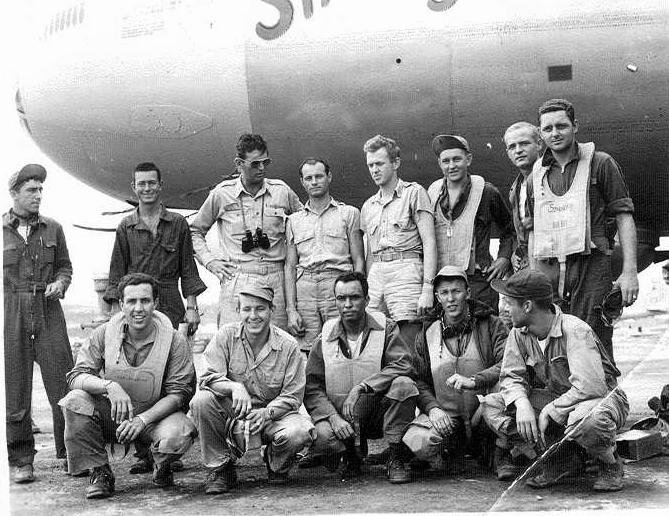 * These six crewmembers died on 7 Apr 1945 while flying “Fortunes Follies” a replacement aircraft.

The Accident Report written on 8 April 1945 reads in part:

This summarizes an accident that claimed the lives of most to the crew. They were not flying the” Snooky” B-29, but a last-minute substitute.

…..On the take off the No.4 engine was lost, and while circling from Tinian to drop their mines in deep water they salvoed the mines. The rear mines fell and the front mines remained intact to throw the ship off balance…they realized they were going to hit. As they landed in the water the plane broke in two at the waist. Cpls. Wipperman, Ford, Birsner and Douglas were washed out and escaped…..Lt. Rinne escaped but died before reaching shore…all the others were stunned and thus killed instantly…..The malfunction of the salvo equipment which was undetected is still unexplained….

Anita “Snooky” Preston Schaezler provided this additional information about the incident, which she obtained from Jack Douglas, one of the survivors:

“The plane that my father and his crew were in when they crashed on April 7, 1945, was not the “Snooky.” The “Snooky” was not ready to fly on this mission so they were assigned a new plane that had just arrived from the U.S. All were not happy about this new plane since it was not fully inspected by his maintenance people. This was plane number Victor 5347. Upon take off, just before lift-off, one of the engines began to lose power. My dad told the crew to get ready we were going in. This did occur about 2 miles from the end of the runway when Jack and three others who were in the radio room were thrown free from the aircraft. Those members of the crew who were in the middle of the plane, survived because as the plane hit the water, it broke in the middle allowing for some survivors. My father and 6 others did not make it.”