HomePacific War HistoryLessons of War: The Home Front Was Critical To... 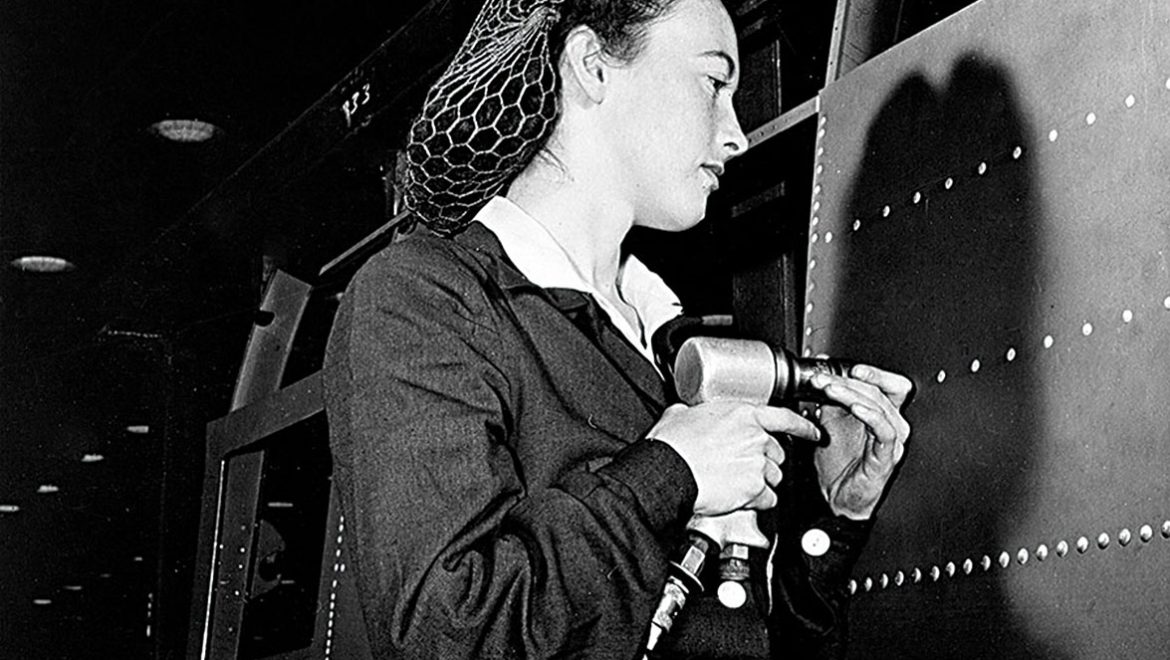 “World War II veterans are happy to believe that the war was won on the battle front. I disagree.”

IN MY VIEW, THE WAR WAS EQUALLY, IF NOT MORE SO WON ON THE HOME FRONT THROUGH THE GREAT TRANSFORMATION OF AMERICA’S SUPERIOR PEACETIME INDUSTRIAL ENGINE TO THE WAR EFFORT. THE JAPANESE ATTACK ON PEARL HARBOR AWAKENED A “SLEEPING GIANT”. OVER THE NEXT FOUR YEARS THE U.S. FAR OUT-PACED THE COLLECTIVE AXIS POWERS IN THE PRODUCTION OF SHIPS, AIRCRAFT, TANKS, VEHICLES, GUNS, MUNITIONS AND OTHER VITAL WEAPONS OF WAR ALLOWING THE ALLIES TO OUTLAST A WAR OF ATTRITION WITH THE INITIALLY FAR SUPERIOR MILITARIES OF GERMANY AND JAPAN. INSTRUMENTAL ALSO WAS THE DEVELOPMENT OF AMERICAN GAME-CHANGE TECHNOLOGIES, OUR FUEL AND NATURAL RESOURCE INDEPENDENCE AND OUR UNITY TO THE WAR EFFORT AT HOME.

At the time of Japan’s Pearl Harbor attack in December 1941, I was 18 working as an industrial machinist while taking engineering courses at Cal Tech in Pasadena. I remember then that the surprise attack brought great fear to our nation. Japan had a superior, battle hardened military that had conquered major parts of China, Southeast Asia, Indonesia and the Dutch East Indies over the prior three years. It had now destroyed much of our Navy’s Pacific fleet and weeks later conquered the U.S. territories of The Philippines, Guam, two Aleutian islands and submarine attacked a coastal refinery in Santa Barbara. All of us were scared that the cities of California would be next. The U.S. was caught unprepared militarily to stand up to the aggression and formidable capability of Japan’s military which had been strengthened and battle tested for major world conquest years prior to its attack on the U.S.

THE AMERICAN RESPONSE TO PEARL HARBOR WAS ONE OF THE GREAT AND MOST IMPACTFUL WARTIME TRANSFORMATIONS IN HUMAN HISTORY. 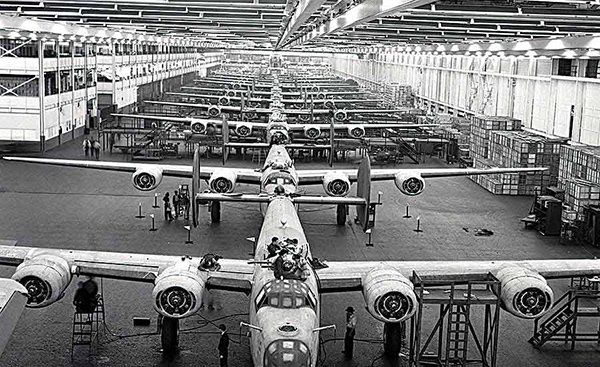 Following our declaration of war on Japan, President Roosevelt created the War Production Board mandating the rapid conversion of America’s expansive peacetime industries to weapons manufacture. Production of most durable goods in the U.S. was banned. The U.S. was the world’s industrial and mass production powerhouse, superior in expertise, technology and capacity and controlling, importantly, manufacture from domestic sources of raw materials, steel and aluminum mills through finished product.

The U.S. was additionally and by far the world’s largest oil and gasoline producer in 19411, critical to maintaining the massive air and naval campaigns that would come. Truck and automobile factories were retooled to mass produce jeeps, tanks and airplanes at unparalleled speed. Toy manufacturers made clips for rifles. Clothing manufacturers made military uniforms and blankets. Ship building was expanded to mass produce destroyers, submarines and aircraft carriers. Manufacturers shared designs and techniques through inexpensive licenses with other companies, allowing essential items to be mass produced simultaneously on multiple production lines.

Most were drafted. I enlisted in the Army Air Corps Cadet program in February 1942 to become a pilot. Most of us joined out of patriotism. I was not called to duty until 1943 when I trained as a B-29 bomber pilot and was deployed to the Marianas Islands at the end of 1944 to serve in the air campaign against the Japanese mainland. In the interim, I remained a civilian in Pasadena experiencing first-hand the great wartime contribution, unity, sacrifice and patriotism of all Americans on the “home front.” 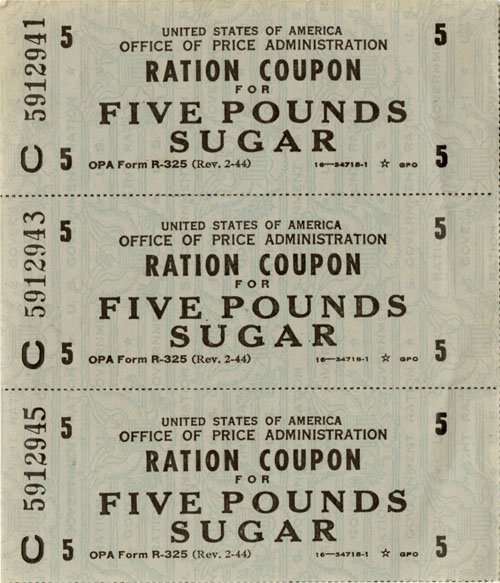 WWII Rationing: “coupon books” given to each household.

The redirect of our enormous manufacturing, farming, oil and domestic raw material resources to the war effort in both Europe and the Pacific theaters created great shortages of food, clothing, fuel and most things containing steel, aluminum, copper, tin, cotton, wool and rubber at home. All were rationed by the government through “coupon books” given to each household. Meat, fruits and vegetables and many other items were in short supply in part because the fuel normally used to transport them was rationed. Many civilians planted backyard “victory gardens” to fill shortages. Imported items, like sugar, were also scarce. Women’s nylons were rationed. Medicines and medical supplies were prioritized for the battle front and mostly rationed domestically for hospital use. Automobile tires were immediately rationed and hard to find. America’s primary source of rubber, the Dutch East Indies, was now controlled by Japan. New automobiles were virtually non-existent. Auto parts were rationed.

WE MADE DUE WITHOUT, BOUGHT USED, SALVAGED AND REPAIRED TO GET BY ON MOST THINGS.

Many of the items we thought were essential prior to the war we discovered weren’t. Families were allowed just 3 gallons of gasoline per week. The national auto “Victory” speed limit was reduced to 35 mph to save resources. Most of us switched to mass transit, carpools, cycling and walking willingly to do our part. I commuted, as did many, by bus.

Home Front patriotism and national unity was wonderful to witness. Fear changed to hope and acceptance of government direction with united support for winning the war. The government initiated many citizen volunteer organizations devoted to support its military needs. These were tasks we took on in addition to our pay jobs. More than 3.5 million volunteers nationally repaired military clothing, wound rolls of military bandages and packaged military personal care items. Many of these were wives, mothers and daughters of servicemen. Others volunteered as nurses and aides helping hospitals care for wounded soldiers or in civil defense positions. 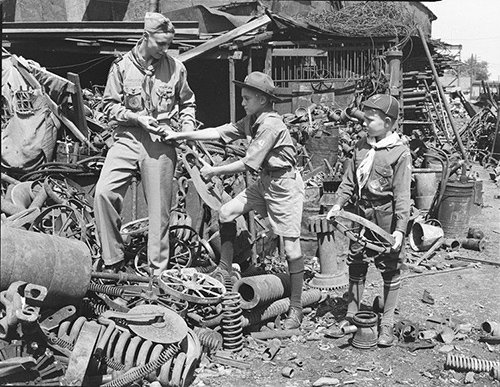 Boy Scouts, with troops in most American communities, became grassroots messengers, members of the Citizens Defense Corps, ran aluminum foil and scrap metal recycling drives. Roughly 75% of American schoolchildren became members of the Junior Red Cross, creating gift boxes for soldiers and running salvage drives for scrap metal and rubber for reuse. Youth were as eager to contribute to the war effort as adults. I became a Block Warden assigned to assure all residences extinguished house lights during air raid blackouts, an unusual job with authority for an 18 year old. Nobody wanted to be reported for non-compliance. Virtually all Americans participated in some form in direct support of the war. We bought War Bonds from volunteers in denominations from $25 to $1000 each to help fund the war, a loan from citizens to the government and a major sacrifice against an average wage of less than $160 per month in 1942. Remarkably, War Bond sales always exceeded government goals.

AMERICAN INGENUITY ON THE HOME FRONT PLAYED A CRITICAL ROLE IN THE WINNING OF THE PACIFIC WAR. 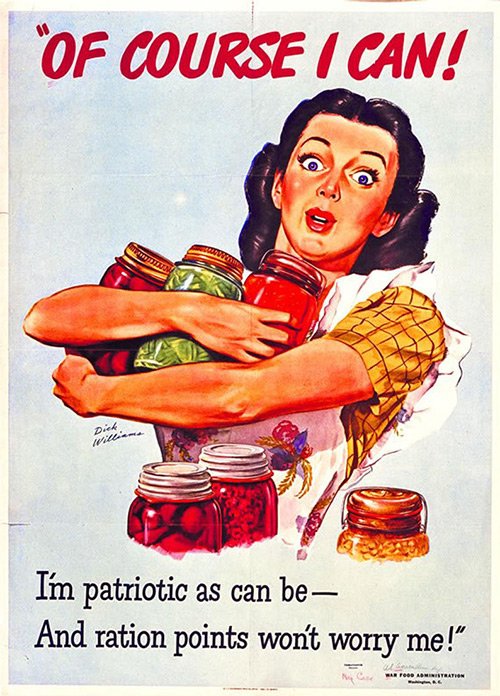 Boeing’s introduction of the game-changing, long-range, high altitude B-29 heavy bomber in 1944 provided the crippling blow to the Japanese homeland that ended the war and from bases outside the offensive range of the Japanese military. I had the great honor of being a part of that air campaign as a B-29 Aircraft Commander. Our devastating incendiary and atomic bombs developed during the war by American engineers and scientists were instrumental to Japan’s surrender.

Through the great mobilization, transformation and unity of America’s industries and citizens, the American home front provided almost two-thirds of all the Allied military equipment produced during the war5:

By the height of the air campaign over Japan, the U.S. produced as many as ten B-29’s per day. For every ship, plane, tank….lost there was one waiting to replace it. Despite their early military dominance, America’s superior manufacturing might, its energy and natural resource independence overpowered and outlasted both Germany and Japan’s war capacity. U.S. factories were the “military arsenal of the world.” 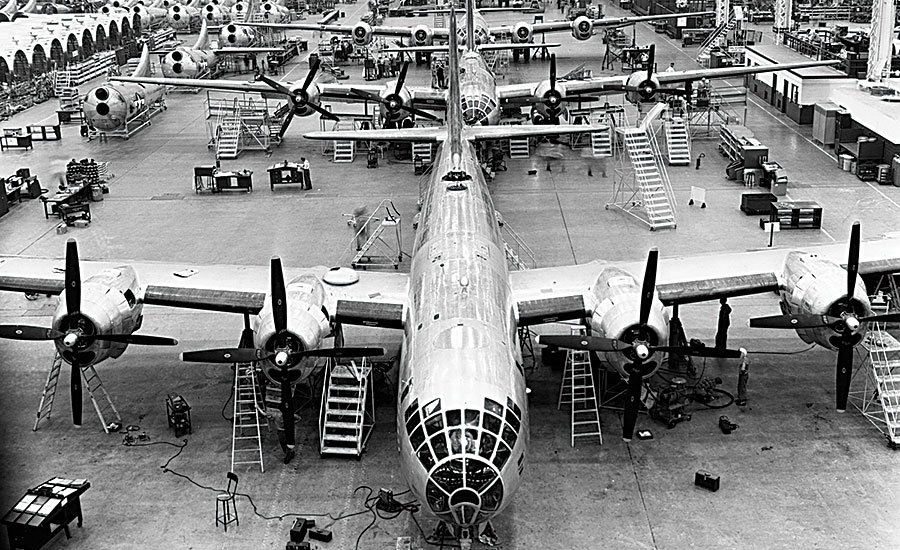 Boeing B-29 Plant in Renton