* According to a later update to the Missing Aircraft Report, their status was later changed to KIA.

The crew was memorialized at the National Cemetery of the Pacific in Honolulu.

Airplane #26. [Serial #42-63558][1/Lt Donald M. Fox], “Tokyo Trolley,” 39th Squadron. Fourteen of the Group’s planes were damaged, which was over one half of the attacking force, and one was lost over the target. This was the airplane manned by Lt Donald M. Fox’s crew of the 39th Squadron. Today only Sgt Harry D. Magnuson of this crew has been found as a POW. The others are listed as MIA. LEARN MORE 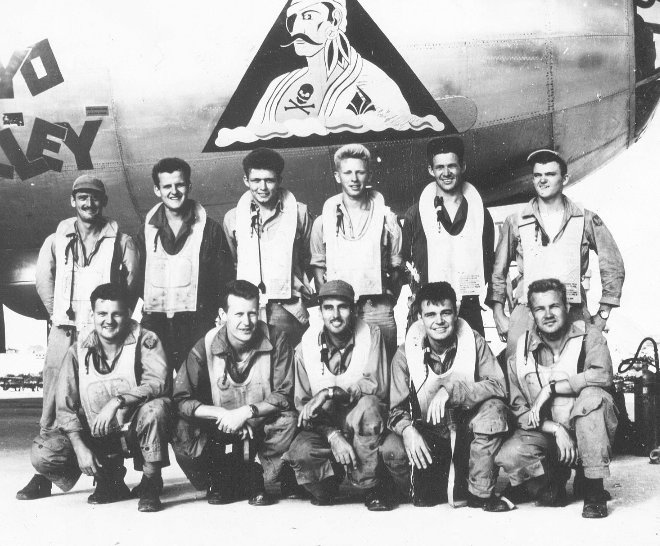 Crew #3917 in front of Tokyo Trolley – possibly taken on the day of their last mission. MORE ABOUT THE CREW
Photo courtesy of David Gaines, All Rights Reserved.

The bodies of the missing crew members were recovered after the war. Lt Wentz and Sgt Warren are buried in the National Cemetery of the Pacific in Honolulu. Lt Fox, Lt Thomas, Sanderson, Sgt Atchley, Sgt Barron and Sgt Arntsen are buried together in a common grave in Jefferson Barracks National Cemetery, St. Louis, Missouri. The body of Sgt Snell was returned home for burial. 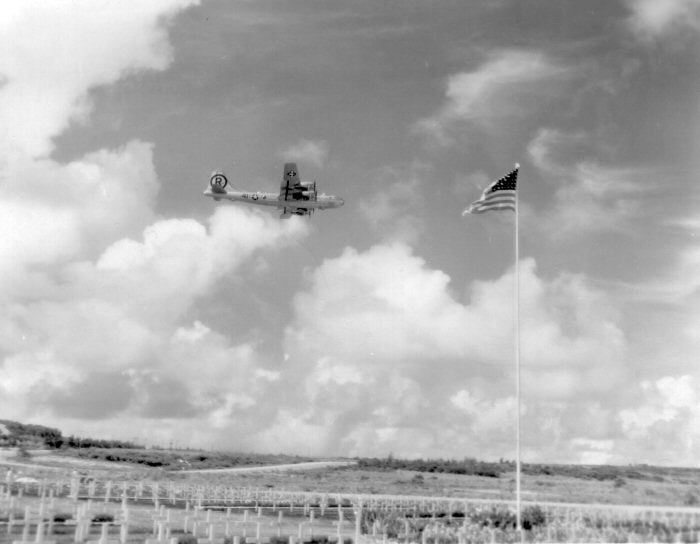 The next mission on 5 June was also a daylight incendiary. This time the target was the urban area of Kobe. All of the Group’s losses for June were suffered ON this day.  Sgt Raymond L. Merritt, 39th Squadron, was killed instantly by a flak burst and S/Sgt Charles P. Magnuson, also of the 39th Squadron, died in the hospital at Iwo Jima from wounds. Both were members of Lt Catt’s crew which had two other men wounded on the raid.

Sgt Magnuson is buried at the National Cemetery of the Pacific in Honolulu. The body of Sgt Merritt was returned home for burial.

On the night of 19 July Capt Gordon P. Jordan and crew, 24th Squadron, failed to return from a mission to minefield “Zebra.” The only information available is reports of other crew members who stated that they saw a burning plane over Niigata. As of 1 Jan 1946, five crew members had been found and repatriated. They were: Capt Jordan, Lt P. A. Trump, M/Sgt G. E. McGraw, S/Sgt W. W. Wiernik and S/Sgt W. W. Dickerson. The six other crew members are still missing-in-action. This proved to be the last of the war for the Sixth. 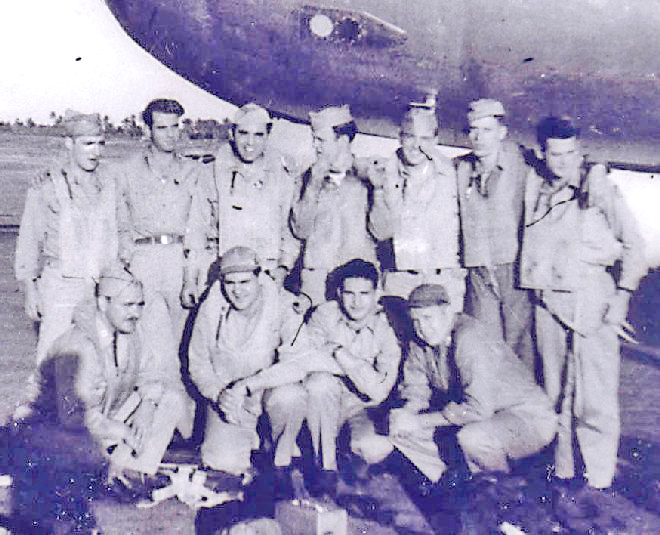 Capt Robert K. Schmid’s airplane with the 40th Squadron Commander, Lt Col Elmer A. Dixon, went down on the 9 July mining mission. Flak was heavy and one plane was shot down. The crew and aircraft lost was commanded by Capt Schmid and carried as a combat observer, Lt Col Dixon. Reports from members of other crews on the mission reveal that one B-29 in the formation was caught in a number of searchlights, sustained several direct flak hits and was seen to spiral down and crash in flames. Since the Sixth was the only group operating in the area, it is a reasonable assumption that this was Capt Schmid’s plane.

Another website contains a picture of the air crew in front of “Take It Off,” a B-29 used in training. LEARN MORE

This crew had just arrived on Tinian and had not flown the regular number of training missions. The squadron commander was on board, in part, so they could call this a “training flight.”

The crew was memorialized at the National Cemetery of the Pacific in Honolulu, except for Sgt Jacques and Cpl Strickland who are buried there.

* According to a later update to the Missing Aircraft Report, their status was later changed to KIA.

The crew was memorialized at the National Cemetery of the Pacific in Honolulu.

On the same raid Lt Joseph Novak Jr., 24th Squadron, co-pilot on crew No. 3906, was wounded by 20 mm cannon fire from a Japanese fighter and later died in a hospital on Tinian. For a detailed account of this flight written by Sam Parks, the aircraft commander, see “Co-Incidences – I Can’t Believe It!”

The body of Lt Novak was returned home for burial.