Almost all crews gave nicknames to their airplanes.

This original collection of photos shows the different identifying nose art and aircraft names painted on each aircraft. The planes, while officially designated by painted aircraft numbers, were most often identified by the names selected by their crews and then painted on the nose of the plane. 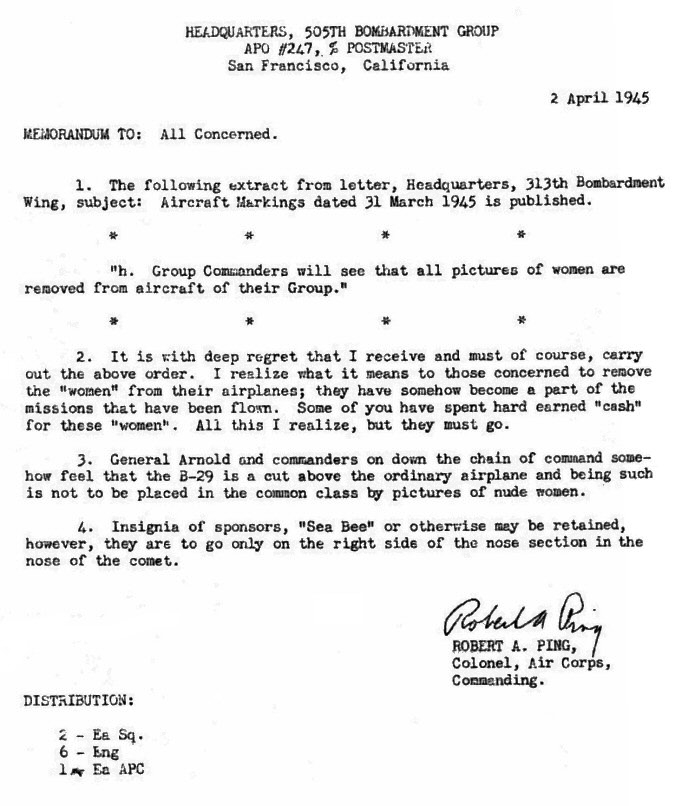 The 6th Bomb Group flew B-29s, including B-29As and one B-29B. When the 6th Bomb Group aircraft first entered service in February, they did not have a lot of decoration. A name might be stenciled on the side and the rudder might have the old rudder markings. By the end of the war, all of the aircraft had the “Circle R” on the rudder. Lead aircraft had vertical stripes on the rudder. The aircraft group number (e.g. “33”) appears on the front bottom and the sides of rear fuselage. The aircraft serial number is sometimes shown on the tail.

Later in the war, the aircraft were painted red on the tip of the tail and on the engine cowlings. This was presumably done to help the groups form up after takeoff. Aircraft used to drop supplies to POWs after the war had POW SUPPLIES written on the bottom of the wings. Almost all crews gave nicknames to their airplanes. Initially, the nicknames were just painted on the side.

Later, the crews began to also decorate their aircraft with artwork, often of scantily-clad women. In response to complaints from the home front, many Group commanders censored the pictures.

The black & white photos below are from Bill Webster’s Nose Collection.

PLEASE WAIT WHILE THE IMAGE GALLERY LOADS then click to view