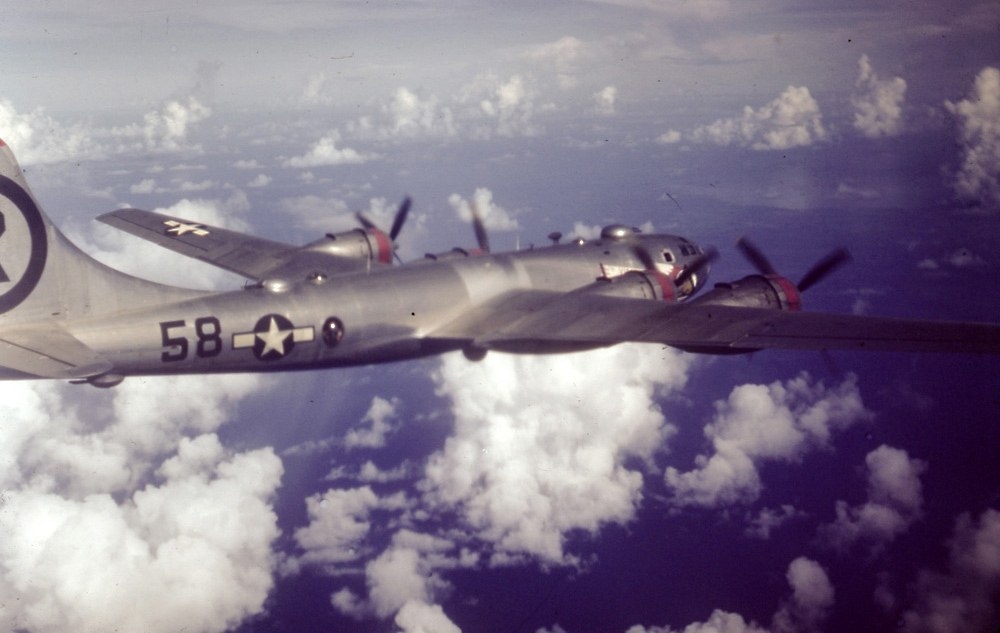 June 15, 1945 – Osaka
My first mission.
We took off at 2 a.m. in the morning. Our assembly point was just off the coast of Japan. Target was the city of Osaka. Arrived as the assembly point about 9 a.m. but the weather was very soupy. Flew around in the soup awhile until we got orders to proceed in over the target alone. We flew into the soup for a half hour. Dropped our bombs by radar & proceeded back. Right after leaving target, we began to pick up ice. Air speed dropped to 120 mph so we came down to 15,000 ft in the warmer. From then on we proceeded back to Tinian without any more trouble.

June 17, 1945– Yokkaichi
Took off at 8:30 p.m. Carried a load of fire bombs. Over target we encountered quite a bit of flak & automatic weapon fire. None of it came very near. Over target Moore tail gunner accidentally held his mic button down. He was breathing very hard and sounded as if he was hit. Made an excellent bomb run over target. Target was ablaze when we got there. After dropping our bombs we ran into a thermal, was pretty rough. No fighters sighted. After leaving target everything went off ok & we landed at Tinian at 8:45 a.m. the 18th.

June 19, 1945–Fukuoka
Took off 5:15p.m. Carried fire bombs. Arrived at target a little after midnight. Town was ablaze. Had quite a few searchlights. While we were on bomb run, I looked over to the right & a B-29 was caught in lights. He was doing evasive action, but still didn’t do any good. We dropped bombs at 00:56 a.m. Right after bombs away, flak began to creep up on tail. Pilot had to dive ship to evade it. Trip back to base was uneventful. Landed at 8:15 a.m. the 20th.

June 25, 1945 — Akashi
Took off at 3 a.m. Carried three 4,000 lbs. Target was an aircraft plant at Akashi. Assembly point was socked in, couldn’t find our formation. Went to target alone. Made our bomb run by radar. Just before dropping bombs broke out into the clear over target. Dropped bombs but missed aircraft plant, hit the city. After bombs away encountered heavy flak. No damage. No fighters encountered. Trip back was uneventful. Landed at 6 p.m.

July 1, 1945 — Ube
Took off at 6:43 p.m. Carried fire bombs. On way to target ran into very rough weather. On way to target over Japan, we could see two other cities burning, hit by other B-29’s. Target was burning a little when we arrived over it. Encountered a little flak & automatic weapon fire. Sustained no damage. Made a good run over target. On way back run into some bad weather. Bounced the ship around. Landed at 8:48 a.m. the 2nd

July 3, 1945 — Himeji
Took off at 6:12p.m. carrying fire bombs. Weather was pretty rough on the way to target. Arrived over target after midnight. Not much of a fire when we got there. Encountered light flak & automatic stuff. No hits recorded. Dropped our bombs (on 4th July) to help the Japs to celebrate the 4th. Didn’t seem to appreciate it. Didn’t see any Jap fighters. More bad weather on the way back. Landed at 8 a.m. on the 4th.

July 6, 1945 –Shimizu
Take off 7:19 p.m. Again carrying fire bombs. Arrived at target about 7 hours after take off. Light flak & automatic weapons over target. None of it hit us. Dropped bombs right on target. After leaving city looked back & could see the city burning brightly even from 60 miles out. Proceed home without incident. Landed at 8:22a.m. the 7th.

July 9, 1945 — Niigata
This was our first mining mission. We carried 7, 2,000 lbs. mines. Took off at 5:12p.m. This was to be a 16 hr mission over 3,000 miles. On this mission before takeoff we had trouble with our own ship so we had to use another. This caused us to take off about 40 minutes late. Niigata is way up on the northern part of Japan. After flying over Japan for two hrs we arrived over our target behind scheduled time. All the other planes had come & gone ahead of us. It was a little after midnight when we arrived at the port.

We were making our run at 8,000′ by radar & just as we opened the bomb bay doors, six searchlights came on & caught us. This scared the hell out of us. For now we knew that they were waiting for us. Then came the flak. It sounded like hail on a tin roof. Talk about scared, wow! The bombardier yelled, “let’s get the hell out of here.” We stayed on the bomb run, dropped our mines & stood the 29 on its nose & climbed like hell. All this had taken place in about a minute. God! That sure was the longest minute I ever hope to live through.

Well we finally got out of range, came out with four flak holes, although nothing was damaged. Landed at base at 9:05a.m.